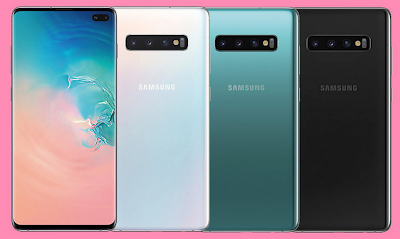 Samsung Galaxy S10 is one of the most anticipated upcoming phone among its competitors. The future phone which is rumored to be launched soon will be one of Samsung’s next flagships Samsung Galaxy S series besides the company’s first folding phone Samsung Galaxy F. As it is scheduled, the successor of current Galaxy S9 will be announced on 20 February. Just like the launch of every new Samsung mobile phones, people are so enthusiastic to see what the future phone will bring. If you are one of those people, let’s read on to see everything we have about

The announcement day of Samsung Galaxy S10, all of detail of the upcoming phone is confirmed yet. There are :
Samsung Galaxy S10, Galaxy S10e, Galaxy S10+ and Galaxy S10 5G. However, we have some clue to lead us to the specs and features may come with the S10. Based on the swirling speculations, the S10 is expected to offer a hitherto unseen of 12GB of RAM and 1TB of internal storage. These facts could be killer features the top branded iPhone XS and iPhone XS Max don’t match. For the processor of the S10, Samsung may use the next-gen Exynos 9820 chip especially for the key markets. This chip uses a more power efficient 8nm fabrication which means the S10 will be one of the most power-efficient phone. This chip will also improve the battery life as well.


The next selling point of the new Galaxy Phone 2019 is the 8K video recording at 30fps and also the improved 4K recording at 150fps which are the Exynos 9820’s basic specs that lead us to the potential triple camera system. The phone is likely offering the smoothest experience for handling visually-intensive apps and games by adding the new Mali-G76 cores. Sadly, the Samsung S10 won’t be the first Samsung 5G phone because the chip is not 5G ready.


Before starting our review of what may be you had new Samsung phone 2018 (Galaxy A9/ Galaxy M20/M10) but now new design and display of the S10, let’s throw back to November 2018 when Samsung Developer Conference was held. Samsung unveiled a brand new bendy Infinity Flex display which is expected to feature on the Samsung Galaxy F on that day that comprises of four Infinity displays. Those displays are the Infinity-O, Infinity-U, Infinity V, and New Infinity displays. From that release, Samsung is likely leading us to the potential true all-screen design. With this display, the front camera will be embedded under the screen, eliminating the ugly controversial notch. This expected design will give a fresh-looking all-screen display.

The Galaxy S10+ 5G generations is the best to choose because had the high features of Galaxy S10 series.

Based on the toward to launch date , the specs and features leaks are swirling everywhere. Everyone is providing what they have got about the phone including the teasing image features triple cameras of what the future phone may look like. The Camera S10 support slow motion and Hyperlapse high Accuracy of Scene Optimizer and Flaw Detection with a Blink and blur detection works best in night mode with low light camera. As it is confirmed by Samsung mobile chief, most of the expectations may come true, he said that the feature very significant design changes, including new lock screen and something he called as ‘amazing’ new colours. This teasing statement may include the ability of the Galaxy S 10 to wirelessly charge other devices. This Samsung phone support fast charging with big battery mAh support all day battery life. It sounds too good to be true Bibxy 3 more functions for home healt and daily experience, automatic call back or auto redial you can learn next how to set up, but we’ll see the proof soon. Just make sure you are following every update about Samsung Galaxy S10+ features for the best you can choose.

Renowned tipster Evans Blass recently shared a picture of the Samsung S10 design. The image shows us the full look of the back and the front of the device. Along with the picture, there is a spilling leak about the new Galaxy S10 plus which could be the first smartphone to support WiFi 6. From here, we can conclude that the upcoming phone of Samsung will make use to Wi-Fi 6-ready chipset of Qualcomm’s Snapdragon 855 processor. But it won’t be anything good if you don’t have a WiFi 6 router, anyway for next Gear sport Samsung Galaxy X and S11 beside Galaxy Note10 or Galaxy Note 11. Advertisement